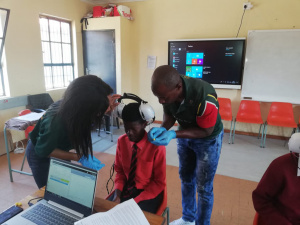 We operate a Hearing Testing and Hearing Loss Programme at schools for needy children.

Young children with undiagnosed hearing loss are often misdiagnosed as suffering from learning disabilities, attention deficit hyperactivity disorder or even autism spectrum disorder. They often present with poor school performance, poor attention, speech and language difficulties or delays and, in many instances, leads to them being regarded as rude or disobedient. In some instances, they may be neglected because the impression they leave is that they are not interested in learning.

The Integrated School Health Policy states that every school-aged child should undergo a hearing screening at each grade level throughout their school career, whilst health professionals recommend that individuals should have a hearing test annually.

The impact of a child with hearing loss is varied and might include:

●    Speech and pronunciation difficulties and delays;

●    Behavioural difficulties, depression and irritability; and

The causes of hearing loss in children may include the following:

●    Illness and disease, such as middle ear infections and meningitis;

●    Trauma, through such things as contact sports, an accident or injury; and

●    Noise exposure, such as earphones, or music and entertainment at high volume levels.

Our team conducts audiology testing and, depending on the results, treats the learners on site, or refers them to nearby clinics for treatment by a medical doctor.

To date, more than 13 727 learners have been tested, many of whom received treatment where necessary.