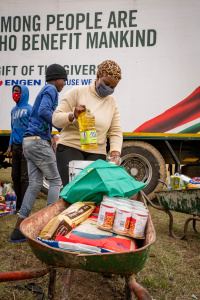 The leading causes of malnutrition in South Africa is the lack of skills followed by subsequent employment scarcity, overall poverty, and exorbitant food prices. Among other illnesses, hunger leads to stunted growth and in severe cases, death. Whilst participating in the World Summit on Sustainable Development, we became aware of the tragic deaths of 167 children in the Eastern Cape. In a resource-rich country like South Africa, death resulting from starvation is unacceptable.

Our response to the hunger crisis in South Africa includes the provision of food parcels. We readily acknowledge that this response is not a sustainable long-term solution, but a very necessary one to alleviate the immediate suffering. In the absence of a viable alternative, the provision of a food parcel might well be life-saving. Only those who have experienced extreme hunger would understand that a food parcel is, exponentially, way more than a mere hand-out.

During a disaster such as the Covid-19 pandemic, hunger affects not only the poor but middle-income-earners as well. We employ a well-rounded approach to our food parcel intervention that includes support to university students, poor communities, scholars, and the sick who are otherwise unable to take medication on an empty stomach.

Our food parcels last an average family of between four and six people.